Elephant From the Upside Down Theory

Bear with me for a bit of silliness  😉

Sometimes I feel cheated when I read the Spoon Theory which many people with chronic illness seem to love so much.  I’m not of fan of the spoon theory.  I think it’s a horrible analogy to tell you the truth. For one thing, where are all these damn spoons containing energy? I don’t even have two chopsticks to rub together to try and generate my own energy most days! It implies we can save energy up…. which is not possible, at least not when you have oxygen dependent PF. You can rest all you want but still have no energy. Mostly what you have is determination  and some days you can’t find that either.

For me, it’s like an elephant sitting on me, and every morning it’s there. It’s the first thing that greets me when I gain consciousness. I just feel like I can’t possibly move or get out of bed with it sitting on me, but I struggle and I get up anyway. I carry it around out of sheer will till I can’t anymore. I always start out with negative energy and have to psyche myself up to face the day. That elephant never leaves, even when I sleep, but it’s obviously easier to sleep than to try to walk around with the damn pachyderm on my back. It feels like at any moment you are going to lose your footing and be crushed. So you rest, and you rest often, because feeling like you are going to be crushed and suffocated is a damn scary feeling, and that’s what it’s like living with PF. It’s not about energy containing flatware 🙄….it’s about avoiding getting crushed by an ornery wild elephant that may go rogue at any moment 😖 .

Actually, elephants are way too cute for the analogy (I love elephants) , but I can’t think of another huge/heavy menacing animal…so maybe it’s an elephant from the upside down….and its soul has been sucked out. Yeah, that’s it exactly! …. Spoons are worthless when faced with a body and soul crushing elephant. But that little spark of your own soul is what ultimately beats it back and controls it, at least for a little while until it gets too exhausting to carry it any longer. Some days the elephant wins and some days I do, but it’s not because I have any extra hidden silverware.  The elephant isn’t tamed by spoons, but if you work with it, show it some respect, it may not crush you, at least not today.

An abstract landscape for you.  This shot also happens to be my current desktop photo.

The post on identity got me thinking of how I see myself as part of the natural world around me and how everything is interrelated. I thought the best way to represent that would be through double exposures, something I haven’t done before, so I started playing around and the shots below are the results.

A Cooper’s Hawk with its dinner.

Preface: This is one of many memories of living at National Jewish Hospital for three months as a kid back in the 70’s. It was an inpatient program for kids with severe intractable asthma and/or lung disease. We came from all over the country and some outside of the US. While I’m not sure it really helped my health much, it taught me many lessons, and most of them came from the other kids I lived with. This is about one of those kids, Eduardo.

He looked so sad. That was my first thought when I saw him. Flaming red curly hair, olive skin, and freckles, tons of freckles. He was very short, about as round as he was tall, and waddled when he walked. I liked him immediately. He was from Puerto Rico and didn’t speak any English, none of the other kids spoke Spanish, and I knew only a few words and phrases. I said hello, and told him in Spanish that I didn’t speak Spanish well. “Hablo muy poco Español” That one broken sentence sealed our friendship and he stuck to me like glue from that point on. He was scared, really scared, and couldn’t talk to anyone. His parents had gone, flown back to Puerto Rico. There was only one nurse’s aid on the floor that spoke Spanish, and she wasn’t the kindest soul. The language barrier made a bad situation a thousand times worse.

Whenever they made him go for medical tests he’d ask me to go with him…of course, I wasn’t allowed to but I always reassured him the best I could it would be OK. I was a shy awkward kid, like most of them, and didn’t know how to deal with other people’s pain. In his first week there he had breathing problems and they had to take him to the unit. He begged me to come with him…it broke my heart because I knew how scary it was. It had happened to me on my second day when I came down with a virus, and I didn’t think I’d live through it, not so much because of my breathing, but because of my fear and being so very alone. I held his hand, but they had to take him.  I couldn’t go, and we weren’t allowed to visit kids there, even though it was just down the hall from our particular living unit. I hoped Leah, a four-year-old angel who slept in the unit, would find him and comfort him. I knew she would. I had learned a lot from that little one and didn’t want any of the kids to feel alone after my experience in the unit.

That was the worst thing about the place, the isolation. It felt like the loneliest place on earth when you first arrived, especially when you were sick and not feeling well. It was overwhelming, and I didn’t want anyone else to feel that way because I could feel their fear and pain. Each time a new kid came through the door and was left crying as their parents walked out the door, you went through it again. Some cried openly and screamed, others sobbed silently into their pillows like I had, but they all did it. It wasn’t summer camp, and everyone knew it. Parents were told this was our best chance at having a normal life, so scared parents left their scared kids, some, like mine, against their better instincts. I could feel my mom’s pain when she left me, so I tried my best to be brave.  I  didn’t cry till she was out of sight. She knew I was hurting and made the goodbye as short as possible.  I’m pretty sure that was also to hide her own emotions. Every kid went through it, even the toughest of them, and some of them were like rocks, or at least they appeared that way, till you found out that they were the most fragile of all.

Ed made it through the unit and was out in a couple of days. With a little attention from me and my roommates, he started to relax a little. We were horrible to him! Not really, of course, we all loved him, but we’d dress him up in girl stuff, treat him like a baby doll, and order him around. I think he liked all the female attention, until one day he realized his young manhood was being challenged when we tried to put pink ribbons in his hair. He went screaming and ranting in Spanish and then explained he was muy macho, un hombre fuerte!  We all died laughing. He was bellowing in his deep raspy voice about his manhood, with pink ribbons adorning his red curls, his round freckled face bright red with indignity. The memory of that spectacle still amuses me to this day. He eventually forgave us for doubting his maleness.

Ed loved BASKETBOLL! (he would bellow this every time it was time to play), and I was his favorite team-mate. He stood in the middle of the floor, there is no way that boy could run. I, “El Gigante Blanca”, as he called me, ran around and fed him the ball. He was like a robot… he’d hit the basket every time! We pulverized the rest of the prednisone stunted kids and were rulers of the court. We made quite a team. I was already my adult height of 5’7”, and he was a little round red midget, who looked a lot like a basketball himself, with a hell of a shot.

He learned some English, and we learned a bit of Spanish, but a lot of our communication was nonverbal, and as an introverted kid, I was fluent in nonverbal communication. One day, a five-year-old girl from Texas came in. She spoke Spanish to her parents, and Ed went to her immediately. She was an emotional mess, and he made sure she had somebody to talk to. She spoke more English than he did, but she seemed to like that another Spanish speaker was there and he was really sweet to her… Ed was no longer afraid all the time, and he definitely was macho.

The day I left, Ed cried openly for the first time. Everyone else avoided me like the plague that day, but Ed came out, hugged me, and cried like a baby… The sign of a real macho man, at the tender age of eleven.

The flames leap up,

A word from you is much the same;

Every sadness melts away

till all that’s left is bliss.

Yet the flame is always close behind,

cruel as it playfully teases.

Inexorably drawn to the flickering flame,

resistance is all but futile.

I lose control and reach too far;

Searing and burning through my soul

Oh so plentiful is the fuel!

I still come back for more.

For one enraptured moment of warmth,

the pain I shall endure. 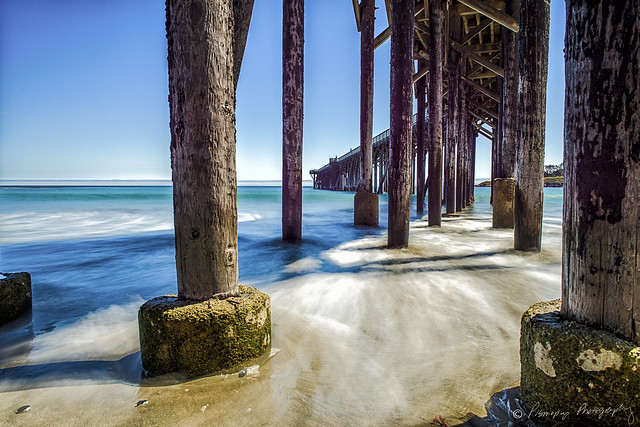 This shot was the last thing my camera saw before it died.

I had already fallen once before this shot and twisted my leg. I had stepped in a hole someone had left in the sand, and fell flat on my face, camera equipment flew everywhere. Thankfully my face and camera bag landed in the soft sand, so the only damage (besides being terribly embarrassed) was a twisted knee, and a lot of sand in my face and oxygen cannula. I was still determined to go get some shots, so I hauled my injured self down to the water near the pier and started shooting.

It was a calm day, without much wave action. I was still distracted by my aching knee, so I got a little careless with my tripod. I didn’t have my hand on the camera strap, which is always my safety when shooting near the waves. Sure enough, a wave came in and undermined the tripod. I threw by body at the tripod hoping to save the camera, but all I got was another face full of sand, wet this time, and a soaked camera. Everything was soaked with sea water.

Neither the camera nor the lens could be salvaged. Both were expensive, and they weren’t insured. It was a costly lesson and a huge oops!